1300 753 675 info@ezycaps.com.au
Home pageNewsThe Straw Man Not The Only One Wearing Straw Hats

For anyone that has seen the “Wizard of Oz”, starring Judy Garland,, they would know the character “The Scare Crow”. The Scare Crow is made entirely of straw and even wears a straw hat. It seems fitting seeing they are all from Kansas and you know in these rural area they like to wear their straw hats. Well in Australia we also like to wear straw hats. You could say that they are part of our tradition here.

They have been around forever and they will probably be around for a lot longer still. They are a simple hat made only of straw. Nice and light weight and what’s even better is that they are great at keeping the head cool. Sure other caps and hats could probably do the job, but when you live in a climate such as ours you want to make sure you have the best. The straw hat is certainly the best at keeping the head cool in the hot Australian such bar none.

What’s great about this particular type of hat is how simple it is. Some of the first hats made by humans were made from straw. The origin of the straw hat can be traced back thousands of years when humans were just starting to form civilisations and manufacturing the goods that they needed to survive. There are several styles of straw hats, but all of them are woven using some form of plant fibre. You have the straw fedora hat which is in the fedora style only had from straw not felt.

There is also the straw cowboy hat which is the most iconic style of hat. You also have the plain wide-brim straw hats that you see people wearing at the beach. Basically these hats are made the same as other hats in that they are first softened by steam or by submersion in hot water and then formed by hand or over a hat block. The material is first woven out of straw and then it is shaped into a hat. More tightly woven hats are usually more expensive as they take longer to make. Also the bigger the hat is the most expensive it usually is.

A Versatile Straw Hat for Promos

What is great about these hats is that due to their versatility and durability they have many uses. Obviously they can be worn to the beach and whilst outside hiking through the woods or in the mountains. They can also be used at work and you will see them on construction sites and in the field being worn by farmers and cowboys. Due to their wide appeal they are also used in the promotional products industry.

Companies put their brand on the hat band which is a great way of getting their logo out there. The straw hat has been around for a long time and the chances are that it will be around for a longer time still. Whether in their simple form or as a more expensive  kind of hat made by a designer label, you are sure you will keep seeing them out there just as you have seeing thousands of time up until now. 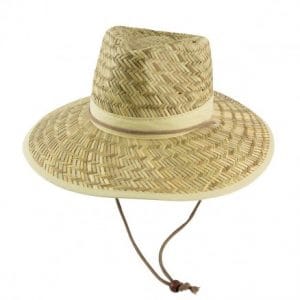